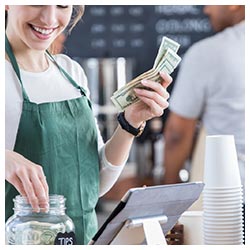 The U.S. Department of Labor (DOL) has released guidance clarifying federal law on tip pooling. The guidance was issued in response to a federal law that amended the federal Fair Labor Standards Act’s (FLSA) tip pooling rules. The DOL guidance states that:

Employers should remember that some states have different rules concerning tip pools and tip credits. When there are differences between state and federal laws in this area, the law more favorable to the employee generally applies.

Trackback from your site.